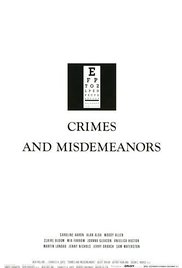 CRIMES AND MISDEMEANORS, the 19th film written and directed by Woody Allen, is about people and the way they choose to live. It’s about love, reality, faith, delusion, success, failure, good and evil – it’s also about what makes people laugh.

In this film, Allen blends the comic and dramatic styles in which he has worked over the years, creating in CRIMES AND MISDEMEANORS a fascinating tapestry of intricately interwoven relationships played against a colorful Manhattan setting. Like Woody Allen’s previous films, CRIMES AND MISDEMEANORS is told through specific incidents that address universal truths as it explores the big questions. As it touches upon age-old themes, the film’s examination of the dilemmas facing its protagonists is quintessentially modern.