SCENES FROM A MALL 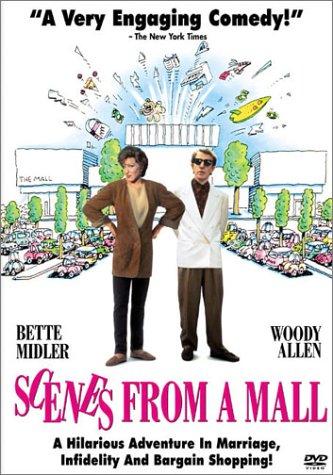 It’s early morning in the Hollywood Hills; it’s Nick and Deborah Fifer’s 16th wedding anniversary; it’s goodbye to their two kids off on a holiday ski weekend and “hello” to a passionate ride on the emotional roller coaster of married life.

Deborah (Bette Midler), a successful psychologist who’s recently written a best-selling book on marriage, and Nick (Woody Allen), a high-powered sports lawyer, are the quintessential 90’s couple with their twin beepers, twin Saabs and ultimately twin true confessions. However, marital mayhem erupts when Nick decides to put his wife’s modern mating theories to the test. While shopping at the local mall for anniversary party supplies, he reveals that he’s just ended a 6-month affair — with a younger woman!

Shocked by Nick’s disloyalty, Deborah is filled with hostility, and parries with some equally astonishing news of her own!

While jousting with their sensitive secrets, the dueling duo soon discover that breaking up is hard to do, especially when complicated by a little thing called love.