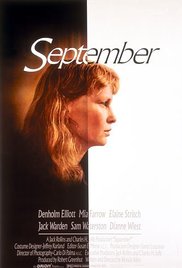 SEPTEMBER, the 16th film written and directed by Woody Allen, is an intimate drama about the experiences of a group of people, as they spend the last days of summer in a Vermont country house.

A contemporary story, SEPTEMBER allows the audience a glimpse into the intense, troubled, emotional life of the protagonists, whose trials and tribulations are universally recognizable. It’s a cathartic tale about trying to survive in the complex world of difficult relationships. Like Woody Allen’s two previous films, HANNAH AND HER SISTERS and RADIO DAYS, this is also a family saga, exploring mother-daughter and father-daughter relationships. As it touches upon age-old themes and feelings, the film’s exploration of the dilemmas facing its protagonists is quintessentially modern.

This is the first time Denholm Elliott, Elaine Stritch and Jack Warden have worked with the director.

SEPTEMBER is a film that probes despair and demonstrates a number of painful truths about the human condition.