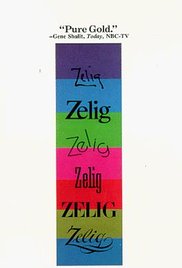 ZELIG is a 1983 American mockumentary film written and directed by Woody Allen and starring Allen and Mia Farrow. Allen plays Leonard Zelig, a nondescript enigma, who, out of his desire to fit in and be liked, takes on the characteristics of strong personalities around him. The film, presented as a documentary, recounts his intense period of celebrity in the 1920s and includes analyses from contemporary intellectuals.

ZELIG was photographed and narrated in the style of 1920s black-and-white newsreels, which are interwoven with archival footage from the era and re-enactments of real historical events. Color segments from the present day include interviews of real and fictional personages, including Saul Bellow and Susan Sontag.

Set in the 1920s and 1930s, the film focuses on Leonard Zelig (Woody Allen), a nondescript man who has the ability to transform his appearance to that of the people who surround him. He is first observed at a party by F. Scott Fitzgerald, who notes that Zelig related to the affluent guests in a refined Boston accent and shared their Republican sympathies, but while in the kitchen with the servants, he adopted a coarser tone and seemed to be more of a Democrat. He soon gains international fame as a “human chameleon”.

Dr. Eudora Fletcher (Mia Farrow) is a psychiatrist who wants to help Zelig with this strange disorder when he is admitted to her hospital. Through the use of hypnotism, she discovers Zelig yearns for approval so strongly that he physically changes to fit in with those around him. Dr. Fletcher eventually cures Zelig of his compulsion to assimilate, but goes too far in the other direction; for a brief period he is so intolerant of others’ opinions that he gets into a brawl over whether or not it is a nice day.

Dr. Fletcher realizes that she is falling in love with Zelig. Because of the media coverage of the case, both patient and doctor become part of the popular culture of their time. However, fame is the main cause of their division; the same society that made Zelig a hero destroys him.

Zelig’s illness returns, and he tries to fit in once more. Numerous women claim that he married them, and he disappears. Dr. Fletcher finds him in Germany working with the Nazis before the outbreak of World War II. Together they escape and return to America, where they are proclaimed heroes (after Zelig, using his ability to imitate one more time, mimics Fletcher’s piloting skills and flies back home across the Atlantic upside down).

Courtesy of Wikipedia, The Free Encyclopedia – Zelig Article (as of December 1, 2017)