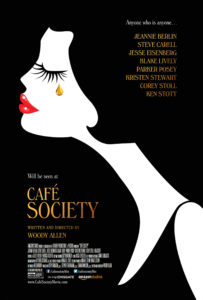 Amazon will open the film this summer with a traditional, nationwide theatrical release. Following its theatrical run, it will become available exclusively to Prime members through Prime Video.

“Like all beginning relationships, there is much hope, mutual affection, and genuine goodwill — the lawsuits come later,” said Allen.

“Woody Allen is a brilliant filmmaker,” said Roy Price, Head of Amazon Studios. “We’re so proud to be in business with him for both his next film and his first ever TV series.”

Allen is also writing and directing an untitled six-episode television series for Amazon starring himself, Elaine May, and Miley Cyrus. It is executive produced by Erika Aronson, produced by Helen Robin, and begins shooting next month.

Producers of the new film include Allen’s longtime collaborator, Letty Aronson, as well as Steve Tenenbaum and Edward Walson. Executive producers are Ronald L. Chez, Adam B. Stern, and Marc I. Stern. The deal was negotiated by John Burnham and Jessica Lacy of ICM Partners, Erika Aronson of Taborlake, and Loeb & Loeb on behalf of the filmmakers.

Amazon Studios launched in 2010 as a new way to develop feature films and episodic series—one that’s open to great ideas from creators and audiences around the world. Anyone can upload a script online for Amazon Studios to review, and those who choose to make their projects public can also receive feedback from the Amazon Studios community.

Amazon Studios is known for bringing Prime members the multi-Golden Globe-winning and Emmy-winning series Transparent and the multi-Golden Globe winning series Mozart in the Jungle, along with original hits like The Man in the High Castle, Red Oaks,Hand of God, Bosch and Catastrophe. Prime members also have access to a collection of Amazon Original Series for kids such as Annedroids, Gortimer Gibbon’s Life onNormal Street, Wishenpoof,and the Annecy, multi- Annie and multi-Emmy Award-winning Tumble Leaf. Coming soon will be the second seasons of Bosch and the romantic comedy Catastrophe, along with the debut season of the docu-series, The New Yorker Presents.

Amazon Prime members have unlimited access to tens of thousands of movies and TV episodes, including Amazon Original Series and Movies at no additional cost to their membership. Prime members can instantly access the entire selection of titles available through the Amazon Video app on TVs, streaming media players, mobile devices, Amazon Fire TV, Fire TV Stick, and Fire tablets, or online at Amazon.com/amazonvideo. For a list of all Amazon Video compatible devices visit www.amazon.com/howtostream.