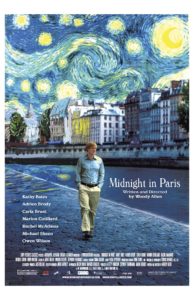 MIDNIGHT IN PARIS is a romantic comedy that follows a family travelling to the city for business. The party includes a young engaged couple that has their lives transformed throughout the journey. The film celebrates a young man’s great love for Paris, and simultaneously explores the illusion people have that a life different from their own is better.

MIDNIGHT IN PARIS is produced by Letty Aronson, Steve Tenenbaum and Jaume Roures. It is part of a three-picture financing deal between Allen’s Gravier Productions and Mediapro, the Spain-based company which also funded Allen’s “Vicky Cristina Barcelona” and the upcoming “You Will Meet a Tall Dark Stranger” to be released domestically by Sony Pictures Classics this fall. Imagina International Sales is handling international sales for MIDNIGHT IN PARIS for most territories.