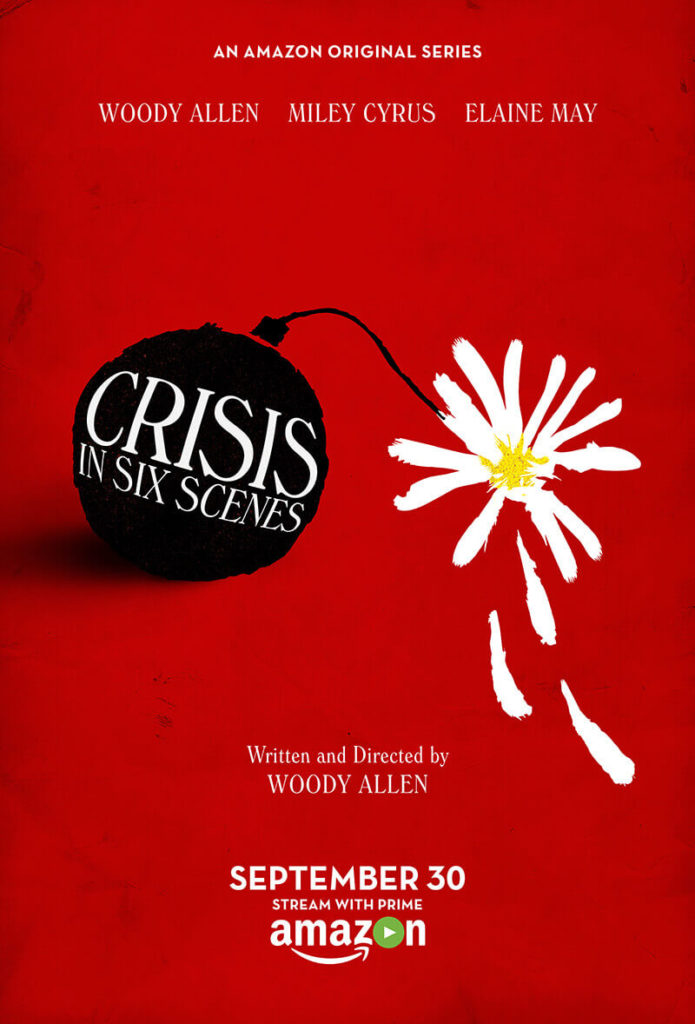 Set in a wealthy Connecticut suburb in the late 1960s, Sidney J. Munsinger (Woody Allen) and his psychologist wife Kay (Elaine May) find their lives drawn into the social unrest of the era and forever changed when “Lennie” Dale (Miley Cyrus), a self-described enemy of the establishment, shows up. Sid dreams of being an acclaimed novelist, while Kay dispenses marital advice to bickering couples. They have also taken in a houseguest, Alan (John Magaro), the son of close friends, as he completes his college studies before joining his father’s investment firm.

Sid and Kay are asked take a stand on political issues they’ve never before confronted. Their choices are made more complicated by the fact that Alan begins to question the life his parents have laid out for him and his fiancé Ellie (Rachel Brosnahan).

That all the matronly members of Kay’s book club find the radical books Lennie has recommended extraordinarily exciting doesn’t simplify things, either.

As the authorities seem to close in on Lennie, and spurred on by their determination not to get arrested as her accomplices, Sid and Kay embark on a series of risky adventures they never before would have thought possible.

“It’s meant to be light, a light comedy,” notes acclaimed writer/director Woody Allen. “The idea for it just popped into my head.”

“Crisis in Six Scenes” takes place during the turbulent years of the late 1960s. It begins late one night, when a middle class family’s suburban home is turned upside down.

“It was a nice release for me, in that sense,” continues Allen. “It’s meant to be entertaining for people.”

When he began working, Allen admits he didn’t realize the enormity of the task ahead of him. Talking of the series in his famously deadpan style, Allen called the undertaking “a catastrophic mistake.”

Allen explained that, “I never should have gotten into it. I thought it was going to be easy. You do a movie and it’s a big long thing; to do six half-hours you’d think would be a cinch. But it’s not: it’s very, very hard. I have great respect now for the people who do all the wonderful series you see.”

Difficult as it might have been, Allen stuck with it, and audiences now have the opportunity to share the latest work of this comedic master. In it, Allen uses some of America’s most serious social issues of the late ‘60s – most of which are still with us today – as a springboard to take a comedic view of the country’s struggles in times of profound societal change.

Allen teamed with Amazon Studios, the division of Amazon.com that develops television shows, movies and comics, then distributes them through Amazon Video, Amazon’s digital video streaming service, and the project proceeded.

When asked about his first foray into creating a multi-episode online series, Allen was enthusiastic, though he freely admitted he didn’t consider himself either a technology wizard or a television addict.

“Look,” he said. “Amazon was very supportive of the project, but honestly, I’m tired when I come home from work, so I watch maybe a little baseball, a little basketball, a little news…But what I’ve seen has been quite impressive.”

Because most of the action takes place in a suburban home and grounds, Allen was particular that the right house and grounds serve as the set. He found his ideal location in the small village of Briarcliff Manor in upstate New York, some 30 miles north of Manhattan.

“We found the ideal house and grounds that we needed,” noted Allen.

The fact that the entire cast was assembled together in the same house, day after day, helped create the right atmosphere, recalled John Magaro, who plays Sid and Kay’s houseguest Alan.

“I think it helped that we were all on the grounds of one set,” he notes. “It made the work feel very communal. And it was a beautiful early spring when we shot it.”

Rachel Brosnahan, who portrays Alan fiancée Ellie, agrees. “It was more like working with a small theater company. I’d only had that kind of experience before on very small independent films. I also like that Woody likes working with friends. It was such a great experience.”

Once the scripts were finished, it was time to turn to thoughts of casting.

For the role of Kay, his wife, Mr. Allen turned to an old friend, acclaimed screenwriter and comedian Elaine May, with whom he worked on “Small Time Crooks.”

“Elaine is a comic icon,” noted Allen. “I needed someone to play my wife and I couldn’t have picked a better actress…I’ve worked with her as both a writer and an actress.”

The casting of the lead role of Darlene “Lennie” Dale, a young woman who has recently shot her way out of prison and is currently on the run from the law, presented a different kind of challenge. She is a no-nonsense revolutionary who despises the middle-class existence that the Munsingers represent – and doesn’t hesitate to show it, or to take action against it.

But who could play such an intense, uncompromising character and still do justice to the inherent comedy in the situation?

“I noticed Miley Cyrus on her first television series with my kids,” recalled Allen. “It was a kids show, but I always thought she had a good comic delivery. She looked like the character I’d envisioned and I was lucky to get her. She lived up to my expectations.”

For the young engaged couple, Alan and Ellie, Mr. Allen auditioned a number of young actors. John Magaro, who portrayed the Munzingers’ houseguest, a young man slated to graduate college and go straight into his father’s investment management firm, seemed an easy choice.

“I had seen John Magaro in ‘The Big Short’ and thought he had the perfect quality for the character.”

Says John, “Alan is a very strait-laced young man who’s following in his father’s footsteps in business, but at the same time he’s eager to sample the new ideas of the Sixties all around him. Though he’s engaged to be married, when he meets Mylie’s character it changes him quite a bit.”

Like many others who have worked on Woody Allen films, working with Mr. Allen turned out to be a learning experience for John.

“Working with Woody is interesting because you only get the pages of the script that you appear in,” he notes. “I don’t know any other directors who work like that, although I think that many of the next generation of directors may take that approach. That makes trust a big part of the process. When you only have your pages of the script, you need to trust Woody, and you need to trust that it will all make sense when it comes together.

“As a cast member, I never saw the entire script, only my scenes,” John recalls. “It’s as if you only get to learn your secret. My scenes all had a particular tone, and it wasn’t until I saw it all pieced together that I realized how very funny it is.”

Rachel Brosnahan, who portrays Ellie, also auditioned for Mr. Allen and says that each initial encounter with the director was very brief.

“Each time I read, I left feeling very unsure as to whether I’d made any impression at all, but the remarkable thing is that once you’re cast, you learn very quickly that Woody trusts his cast implicitly. What a gift that is for us.

“’Annie Hall’ is one of my all-time favorite films, so it’s always been my dream to work with Woody,” Rachel continued. “And it certainly turned out to be a pleasure because he absolutely trusts the people he hires.”

In the end, a story of the 1960s came alive through connections with social issues that are still relevant today.

So what did Allen like best about the finished series? What pleased the distinctive filmmaker the most?

“It has the merciful quality of being short,” he said, then allows, “You won’t be bored long.”